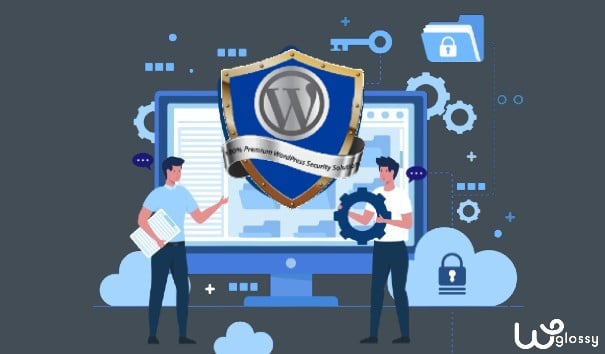 It’s a fact that WordPress is the world’s most popular content management system. Besides being free software, this CMS puts thousands of plugins and themes at its users’ disposal, allowing them to create any website.

The best part is that WordPress fundamentals are relatively easy to learn. So, non-tech savvy folks can quickly start designing sites as soon as they get hold of its intuitive point and click interface.

But as the leading CMS out there, it’s not a surprise that WordPress has the largest share of detractors. Most of these come in the form of direct attacks and malware.

The Wordfence Threat Intelligence team reported that Wordfence was blocking 2,800 attacks per second throughout 2020, totaling over 90 billion malicious attacks.

WordPress is as Secure as You Make It

There is a growing concern about WordPress security. And it would be very remiss of us to ignore these worries considering the increasing number of successful and blocked attacks aimed at this CMS.

However, while it continues to get a bad rap for security, WordPress is secure, and it’s continually being audited by hundreds of developers to keep it so.

It’s just that this CMS is open-source, so anyone who understands its database and architecture can devise ways to penetrate the core and launch an attack on targeted sites.

That being said, you should be aware that your WordPress site’s security is, to a large extent, yours to take care of.

If you get hacked because you failed to use trusted hosting providers and strong passwords or keep your plugins and themes updated, then the problem is with you, not WordPress.

As it comes out, your site can be as safe or as vulnerable to attacks as you make it. It’s practically impossible to get your site’s security to Fort Knox status due to the WordPress world’s continuously evolving risk.

The key is to perform regular vulnerability tests to detect and fix WordPress security problems before hackers exploit them. A WordPress vulnerability scan is an organized and efficient process of identifying security weaknesses.

Regular vulnerability testing provides you with a risk background of your site, bringing to your attention serious security holes for resolving before they can get misused.

Methods of Checking for Vulnerabilities on a WordPress Website

An open-source vulnerability scan is an essential practice for organizations and enterprises that take website security seriously. Most organizations prefer tools that scan continuously to ensure that they are getting extensive coverage from most known exploitable threats.

Some of the best open-source vulnerability scanners proactively spot and help you fix bugs and flaws based on a comprehensive proprietary vulnerability database that’s updated daily for precision.

WPScan is a free, non-commercial WordPress tool that scans your website to reveal bugs and errors that need to be patched.

What’s unique about the WPScan is that it’s a black box scanner, meaning that it spots vulnerabilities from the point of a malicious actor. Secondly, this tool scans your site against thousands of well-known vulnerabilities that it has continually added to its database since 2014.

Keep in mind that WPScan is not compatible with Windows. It only works on Linux or OSX installations. If you’re using Windows and don’t have access to Linux or OSX, an alternative is to download Virtualbox, which lets you install Linux as a virtual machine.

Another thing to note here is that you need a free API key from wpscan.com to use WPScan to check for vulnerabilities. The key also checks for other WordPress problems that don’t require API tokens, such as weak passwords, HTTPS enabled, and debug.log files.

Here’s how to scan for vulnerabilities using WPScan:

1. Install or update existing WPScan using either of these commands

3. Use the following command to detect vulnerabilities in your plugins and themes

4. Brute-force test your passwords using the syntax below

A WordPress backdoor is malware that offers hackers unauthorized access to the server. A backdoor threat can be in different forms, including a malicious file, an infected plugin, and spam emails tweaked to look like they are sent from an accurate WordPress site.

Backdoors typically allow malicious actors to bypass authentication while avoiding detection by the owner. After breaching into a site, hackers can lay low and remain hidden as they do everything from adding themselves as secret admins to collecting personal data.

WordPress backdoors vulnerabilities aren’t so easy to detect as they can come from anywhere from a buggy plugin or theme to outdated installations. However, some techniques work, including safe listing, block listing, and anomaly checks. I have already discussed some tips to clean your hacked site from Backdoors.

There are two types of WordPress penetration testing;

Whitebox penetration testing– in this type of test, the site owner provides the pentester with complete information about the website, allowing them to search for vulnerabilities deeply and widely.

Blackbox penetration testing– in this type of test, the penetration tester does not know about the website they are testing from the owner. Therefore, they emulate real-world hackers as closely as possible.

Penetration testing isn’t as simple as quickly running a pen-testing tool against your website. Pentesters typically follow a systematic approach to uncover any potential vulnerability in the site. Successful WordPress audits typically involve these four steps;

As the WordPress content publishing medium is open-source software, it is essential to care about its security. Don’t provide the keys to the hackers, as they always look for loopholes to steal your data by conquering the site access.

WordPress vulnerability scan takes the responsibility of finding the security threats and preventing your web assets from being attacked. It performs a set of automation processes to catch the potential weakness of your site and let you fix them at the earliest.

2 thoughts on “How to Check a WordPress Website for Cyber Vulnerabilities?”